Can I get an amen? This life is tough stuff. But I’ve found that it’s exponentially MORE difficult if you don’t have the right frame of mind.

When you can look past some of the situations that aren’t deserving of your attention, you’ll save yourself peace of mind and happiness. Wouldn’t it be a dream come true if you found true peace in your stepmom role in 2020? If you’re ready for change, you’ll stop worrying about these 20 things. 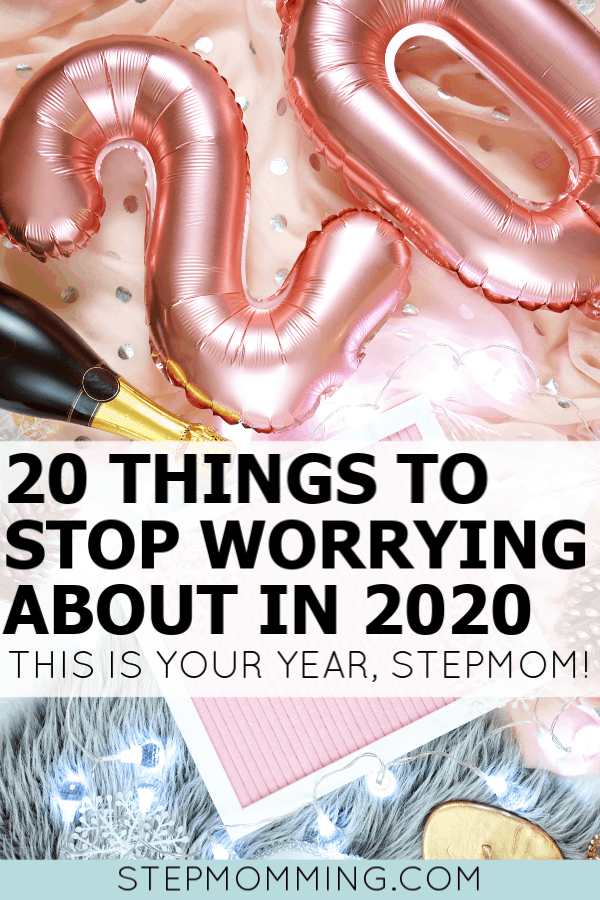 1. How Others View your Parenting Role

The only people who get it and won’t tell you “You know what you were signing up for” are other stepmoms. So stop worrying about how others view your parenting role. Stop letting their ignorance inhibit your happiness.

I get it. It stings when someone says you’re not a “real mom.” But you have to stop worrying about it! Worry will not change their perceptions, and it will not change your contribution. You’ve got this, Mama.

2. What’s Happening at the Other Parent’s House

Yup. I said it. Not what kind of food they’re eating, not what time their bedtime is, not how many reading minutes they’re logging. None of it.

So STOP stressing about it! The time to eliminate unnecessary stressors is now.

3. What your T-Shirt Should Read

Do you feel like a Mama Bear to your hubby’s Papa Bear? Then get the damn shirt. Stop overthinking it.

4. What the Other Parent is Posting on Social Media

If you are worried about what your stepchildren’s mom is posting on social media, it is time to BLOCK HER. Don’t unfollow. Don’t mute. Do not pass go and collect $200. Block her.

There is absolutely no justified reason that her social media feed should cost you a second of happiness or peace. Nope. Not a single one.

5. The Other Parent’s Name

Stop worrying about if your partner’s ex still has his last name. I 100% understand that you are the only Mrs. Hunkalicious now and that she missed out on that, but you worrying about her name is only causing YOU discomfort. She couldn’t care less that it bothers you (Or worse, she could feed off of your discomfort).

Also, she just wants her name to match her child’s, and you can’t fault her for that. You’d want the same.

6. Your Co-Parent’s Opinion of your Decisions

Do you believe that you’re a skilled decision maker? Are you a capable adult and parent? Then stop letting anyone’s opinion—especially the other parent’s—affect your decisions. If you’re concerned with her response to your decision before you even make it, you are spending far too much time thinking about her and not enough time thinking about you.

In 2020, you will be your biggest priority. Not anyone else. Got it?

7. What Anyone Thinks about you Having a Baby

Do not allow one more second to pass by worrying about what anyone else has to say about you and your partner’s reproduction.

8. The Effect on Others by you Enforcing Boundaries

They were put in place to protect you, and that’s exactly where they’re going to stay, unapologetically. 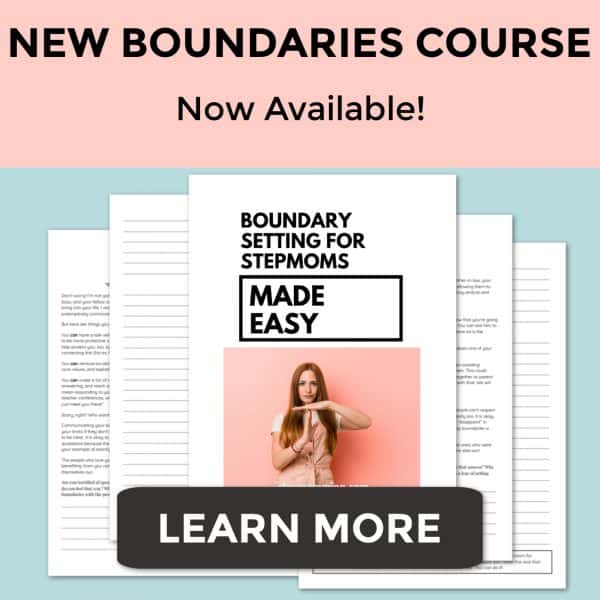 9. Who is Friends with the Other Parent on Social Media

In 2020, it’s not going to matter, babe. You’re so past worrying about who is connected with your stepchildren’s other family that it’s not even going to phase you. It’s not going to cost you your peace this year because it’s simply not worth your time or your mental real estate.

Your husband already experienced his “firsts” without you. First love, first marriage, first baby in the baby carriage – and that can wear down a stepmom spirit more than anything else blended family life hurls at you. But chin up, babe. You may not be the first, but you’re the last.

You’re the one that gets forever.

Don’t let his past rob you of your present or your future. Stop worrying about the “firsts” this year and forevermore.

11. Comments about the Other Parent

You know those painful moments when your stepkids praise their mom for doing things you also do? And you’re never acknowledged for doing those things?

That awesome stepmom double standard? Yep. You’re going to stop worrying about that in 2020. Don’t let it phase you as you head into the new year because it just doesn’t matter in the grand scheme of things.

12. The Day you Celebrate Holidays

Whether it’s Mother’s Day, a birthday, or Thanksgiving, don’t let any of the holidays bring you down in 2019. There is nothing special about a specific day of the year; it’s the associations you have with the day that make it significant—not the date on the calendar.

Therefore, if you need to celebrate Mother’s Day a week later (on Stepmother’s Day – yep, it’s a thing!), a birthday a day or two later, or Thanksgiving on Saturday instead of Thursday, then that’s perfectly okay because there is not anything significant about a calendar day.

Be flexible and don’t let holidays or celebrations cause you stress or a moment of unhappiness in 2020. You’re better than that.

This is a HUGE one, mama, so listen up.

Stop worrying about whether your stepchildren prefer your house or their mom’s.

Stop worrying about whether your stepchildren like you or their mom better.

Stop worrying about whom they run to first after a dance recital or soccer game.

Stop trying to be the better home. Stop focusing on one-upping. Stop comparing. Stop, stop, stop! It’s not a competition; it’s a collaboration and a team effort.

Have you read about what I really want to tell my mother-in-law?

In the new year, don’t let your in-laws and their sometimes insensitive or ignorant gestures and comments offend you. They’re sometimes overbearing and get in the way, but they love your partner. Try to focus on the good intentions and stop worrying about their reactions, their comments, and any shade they might throw your way.

I’ve heard stepmoms fret about their husbands having old photos with the mom in them on Facebook, stress about their partners not tagging them in posts on Facebook, and express concern about what others might think of them based on their social posts.

16. What Used to Be Hers or Theirs

Are you living in the same house your husband lived in with his ex-wife? Do you share some of the same furniture or accent pieces? Does it make you cringe?

I totally get it. No one wants that reminder of his life before you. But here’s the thing – it’s an inanimate object. It doesn’t need to be a reminder of anything. It serves a purpose.

A house puts a roof over your head. A couch provides seating for family and guests. A frame can house their wedding photo or a picture from your summer family vacation.

We assign value to things. It’s only cringe-worthy if you decide it is. If you stop worrying and change your perspective, it’s a great way to save money and repurpose.

Did the mom send him in a jacket that’s two sizes too small? Did she forget to send back that beautiful dress of your stepdaughter’s? Does she always send ratty clothes and you lose beautiful ones which are never returned home?

The reality is, this battle will never end, mama. Your stepchildren are transitioning homes. They are taking all sorts of belongings (not just clothes!) with them as they transition.

Do your best to keep plenty of clothes on hand and treat the mom the way you’d want to be treated. Send her clothes back as soon as they arrive. And if your stepchild returns home in something you don’t approve of, then change the outfit and set it aside.

It’s really that simple. Work to simplify and de-stress your life in the new year. Don’t let the little things bother you.

18. What Your Kids are Wearing

Along those same lines, stop stressing about what your stepchildren are wearing.

If they were sent to school in an outfit that is inappropriate for the weather, ugly, or simply unstylish, don’t sweat it!

In 2020, you’re not going to rush to the rescue with a change of clothes and a hairbrush. This is the year you’re going to let it go and focus on more important things.

(And if you’re upset at me about this one, here’s my reasoning: it is far more embarrassing to be pulled out of class to change clothes than wearing the original outfit was. Plus, oftentimes, children pick out their own mismatched clothes, and changing them from that outfit damages their confidence and stifles their artistic spirit.)

Does your partner’s general apathetic nature make you want to scream? His laissez-faire approach to bedtime. His greater allowance for screen time. His lack of structure and rules.

Take a page out of his book in 2020 and just say no to rigid rules. If bedtime comes ten minutes later this evening because you’re all enjoying time as a family, that’s alright!

Don’t be so wound up in the new year. Breathe more, stress less.

Does she do things just to piss you off? Or to inconvenience you? Does her new husband send you over the edge by going out of his way to be petty?

Stop feeding into it! Do not give in to the immaturity—by responding, by allowing it to cause you to react, or by even worrying about it.

You will encounter petty people your entire life. Learning to look past those actions without a second thought is a necessary life skill.

So what do you say, mama? Are you ready to stop worrying about these 20 things in 2020?