Top
You are here: Home / Family / Pregnancy & Baby / 50 Things NOT Okay to Say to Pregnant Women

When you’re pregnant, you’re stressed. Your mind is going a mile a minute and tripping on its own shoe laces. In my experience, “Mommy brain” is a very real phenomenon. You’re constantly thinking (and worrying) about so many things that half of it will get lost in a sea of to-do lists, work duties, bills, and baby planning agendas.

Even with so much going on in your life while your body prepares and grows a human, life just has to throw you for a loop sometimes – in the form of insensitive comments.

Just like there are some things your Grandma shouldn’t know, there are quite a few things you should never say to a pregnant woman. Comments about weight or size, about the number of children she has, how your advice should override her doctor’s, rude comments stemming from jealousy…

To get a better grasp on what people are actually being told while pregnant these days, I took to Facebook. Within an hour of posting my innocent question “What’s the worst comment you’ve ever had said to you while pregnant?” on my own page and a Mommy group, I was blown away by the responses. Hundreds of moms chimed in to share their experiences.

While most of them were pretty funny after the fact, at the time they were nothing to laugh about. But some… well some really knocked my socks off by how rude people can be.

Ready to find out how mind-boggling people can be?

50 Things NOT Okay to Say to a Pregnant Woman

Commenting on Her Size

The most common thing NOT to say is basically any comment about a woman’s weight. We don’t talk about it when they’re not pregnant, and we shouldn’t talk about it when they are. That is, unless it’s super flattering. Like “Oh my gosh, girl! You look so good!” or “Wow you just had her a week ago? And you’ve already lost so much weight? Awesome!” or “Girl you look so fabulous preggo. What a natural.” Unfortunately these women weren’t so lucky…

“Wow are you having twins? You look huge.”

“No really, I mean you must have gained at least 60 pounds.”

“You must be having twins. You look like you swallowed a beach ball.”

“Wow it looks like you’re gaining all your pregnancy weight in your thighs.” (From her boss)

“I can tell you’re ready to have the baby because you’re swollen everywhere.”

“You don’t have ankles anymore, you have cankles…”

“You don’t even look pregnant, it just looks like you got fat again.” AGAIN??

“Hopefully once the baby comes you’ll go back to your original weight. What a waste of all that running just to get fat again…”

“Are you sure you’re pregnant or are you just fat?” (After meeting her Father-in-law for the first time)

“Are you even pregnant? Or did you just eat a big lunch?”

“Are you one of those pregnant ladies that starves themselves?” (To a mom with severe morning sickness)

“That’ll do pig.” (A father-to-be referring to Babe the movie)

“Oh, you’re pregnant? Good! I thought you were just fat!”

Judging Her Number of Children

Whatever your personal preferences on number of children are, it doesn’t mean other mamas have to think the same way. But it’s especially important not be judgey when making comments to pregnant women, even if it’s about something you might think isn’t that big of deal.

“I thought 2 was enough… you don’t need anymore!”

“You’re going for a soccer team aren’t you?”

“I thought you were done?”

“You’re getting your tubes tied after this one right?”

“Wow you’re having another girl? You should just stop.”

“You must be having a…” starts a majority of the conversations you might have with a mama-to-be. But many moms get so tired of hearing the same comments over and over that they seriously consider slapping the next offender. It’s okay to comment on gender to have fun, but when you start making assumptions about their plans, trying to override their doctor’s gender reveal, or start judging gender based off of how much weight they’ve gained, most women get pretty peeved.

“You’re hoping for a girl, right?”

“Oh, you’re having another girl? Oh… so you’re going to keep trying for a boy?”

“You’re so big all over! You must be having a girl!”

Saying Anything Close to “You’re Ugly”

You’d think this would be common sense to refrain from calling a pregnant woman unattractive, but you’d be surprised what comes out of people’s mouths.

“You must be having a girl because girls take the beauty from their moms… but don’t worry, you’ll get it back.”

“Are you feeling okay? Your glow is gone.”

“You really did get some bad stretch marks. Have you looked into exercising? That looks awful!”

“Being pregnant is not an excuse to stop taking care of yourself.” 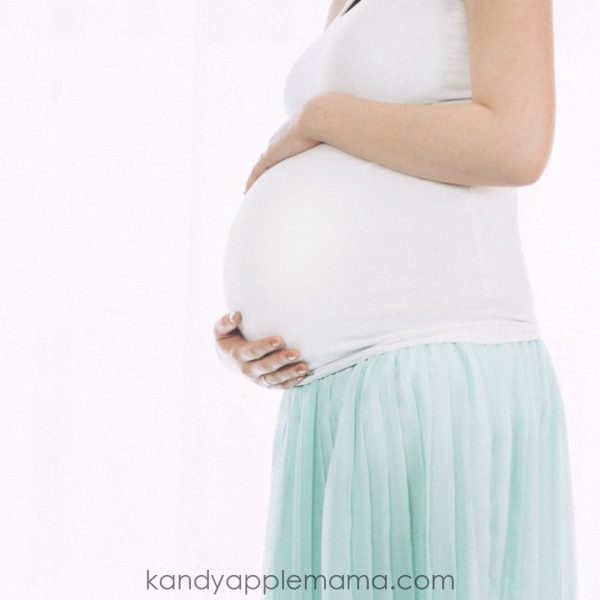 Calling Her Baby an Accident

Yes, many moms plan their pregnancies to the T. Others don’t plan at all and just go with the flow. But no matter what a mommy-to-be plans or doesn’t plan for, it’s really none of your concern. You may be genuinely curious, but most moms take offense to you calling their little blessing an “accident.”

“Is this a shotgun wedding?”

“You should have gotten married first, then had a baby.”

“I told you you needed birth control.”

Scolding Her Pre- and Post-Baby Actions

During my second pregnancy, I hated hated hated when people would try to tell me what I should and should not do while pregnant. I’d act surprised “Really?? Is that true??” and just keep doing whatever it was I was doing. It helped that I had been through it all before and already knew what to avoid. Many moms just can’t stand it.

“You shouldn’t be allowed to have kids! Drinking that stuff while you’re pregnant?? Clearly you don’t care.” (She was drinking a root beer.)

“If you’re gonna complain your body hurts you shouldn’t have gotten pregnant.” (Um… excuse me? Have you been pregnant?)

“You know you’re not supposed to eat that.”

Commenting on Her Age

When I was pregnant with my first child, continuing on through her toddler years, strangers would always give me weird looks. I know I’ve always looked young, and having adult acne and braces for a second time probably only added to the confusion, but comments about my age would always make boil inside. Apparently the same goes the Case other way for anyone over the age of 30.

“You look so young… how old are you?”

“Are you even old enough to have a baby?”

“You must be high risk.” (Because she looks older.)

“You should consider adoption so that your baby has a better life with someone who knows what they’re doing.”

Saying Anything Referring to a Miscarriage

Miscarriages are serious, emotionally painful events that don’t call for continuous comment. If a Mommy who has had previous miscarriages is blessed with another bundle of joy, try not to allude to the previous babies. She hurts enough even without your comment.

“Are you going to try and keep this one in there?” (Mother-in-law referring to her 3 previous miscarriages)

I could hardly believe this was a real comment, and from a Mother-in-law, no less! Despicable.

“You know if you miscarry it’s just God’s way of saving that baby from you not being ready.” (From an older woman she didn’t even know)

Suggesting She Have an Abortion

I was surprised to find out how many mean, hateful comments people, even strangers, said to so many expectant mothers. Just so you know – as if it isn’t already common sense – any suggestion that a women get an abortion is never okay. That’s a decision she and she alone can make. Your opinions are not necessary.

“You should get an abortion.”

Giving Her Grief for Her Relationship Status

Once again, we’re talking about something you have no right to comment on. Unless she strikes up a conversation with you about her baby daddy or lack thereof, there’s no reason for you to bring it up, especially in a condescending manner.

“I heard being a single mom is a b*tch – good luck making something of yourself!”

“Must have got your dates wrong. You sure that baby doesn’t belong to someone else?” (Because she carried a week after her due date)

“You don’t deserve to have a child with my son!”

“Are you sure the baby ain’t [insert random other race]?” (Alluding to an affair) 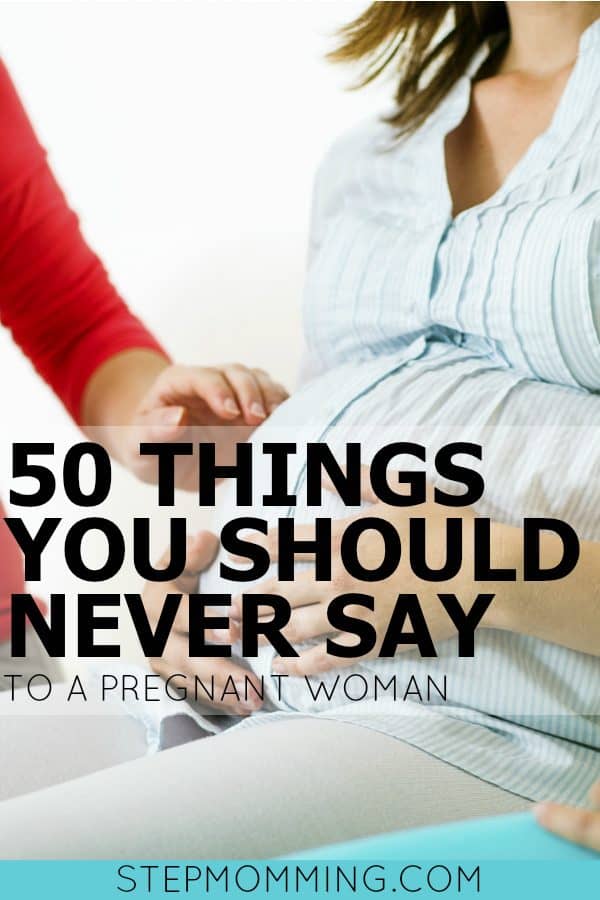 Can you believe each and every one of these comments were actually uttered by friends, relatives, and strangers to pregnant women just like you or me? Some of them are so bad it really blows my mind.

If you’ve been the bearer of bad comments before, apologize! And do better next time. Think before you say things that may come across as rude, offensive, or condescending. And whatever you do, don’t say these things to expectant mothers.

Mom - Wife - Creative
Amanda lives a work-from-home life, loves finding ways to be create, and surrounds herself with as much positive energy as possible.