It was kind of a rocky road for me when I first started dating my now-husband. I was learning how to be a parent, doing my best to break down his emotional walls he built up after his divorce, all while seeing his ex-wife weekly. There was so much change happening at once, and it was challenging to stay afloat.

I felt jealous, inadequate, and insecure, and I channeled those negative emotions into picking apart every single thing my stepdaughter’s mom Amanda did. I was upset any time she fell short of these parenting expectations I had built up in my mind.

Here are just a few examples:

1. I was angry when she didn’t take our daughter to a softball game we had woken up early for, so we were left watching the other girls play.

2. I was aggravated when I went to pick our daughter up at the scheduled time and couldn’t get anyone to answer the door or the phone.

3. I cringed when my stepdaughter told stories about staying inside all weekend with the blinds drawn inside Mommy’s house.

4. I was disappointed she got pregnant soon after dating a new man and worried it would affect our daughter.

5. I hated that she didn’t return most of the clothes I sent our daughter to school in on her pickup days, until I asked for them.

I could go on and on, but I won’t bore you with my petty behavior. One day I had what I call…

How to Find Complete Peace as a Stepmom: The Co-Parenting Mental Shift

It’s this beautiful thing that happens when you stop thinking about me and my family and start seeing things through your child’s perspective. You stop worrying about “my time” and counting days and start focusing on your child’s needs and wants.

It all started for me when I came across this Maya Angelou quote.

“If you don’t like something, change it. If you can’t change it, change your attitude.”

She was SO RIGHT.

First, as evidenced by my list of grievances, there are many things we don’t like in our co-parenting relationships. No parent is always going to do things exactly as you’d like them to do it, or as you’d do it yourself. Your new spouse probably doesn’t even do things exactly the way you would!

So if there are things you don’t like, quit complaining about them and change them! If you don’t like the fact the other parent is late to (or misses) extracurricular activities on his/her time, then don’t schedule extracurricular activities on anyone else’s time but your own! If the other parent doesn’t send clothes back unprompted, just ask for them! I’m sure it’s not intentional or malicious.

Second, if you can’t change it, you need to change how you look at it! I couldn’t change that Amanda got pregnant, but I could see it differently. The situation didn’t have to be frightening; it could be exciting instead. My stepdaughter was getting a sister! Instead of being afraid it wasn’t a man my husband or I had ever met, we needed to focus on Amanda’s ability to make good decisions and trust her.

Many of the times I was upset early in my co-parenting journey could have been avoided if I had either changed the situation or changed my attitude. There’s no sense in crying over spilled milk or closed blinds. If she’s not harming our daughter, is there really any reason to be alarmed? Nope.

Quit Being a Control Freak

It really all comes down to control, or the lack thereof. When you co-parent between two homes, you don’t get to control every aspect of your stepchild’s upbringing. Amanda is Vegan-ish, but she doesn’t tell me what I can cook for her daughter in my house. Kevin and I are stringent when it comes to screen time, but we don’t tell Amanda how many hours K can play on the iPad at her other house.

I wholeheartedly understand that it is difficult to give up control when it’s something you care so much about, but you have to trust your co-parent to take care of your child in his/her care.

If you’re really struggling, try to talk to the other parent about making sure house rules are similar in both houses; consistency does help a child, and it will help you to know that you’re on the same page. If there are certain standards you can’t budge on (No R rated movies under 10, curfew at 9, etc.), then you’ll need to sit down and have a conversation and discuss the issues. You can’t make demands or control the conversation; the other parent has a say as well.

It’s All About Perspective

After several conversations about the past and our actions, Amanda and I finally understand exactly where we were each coming from with past actions. Though we may still disagree with the actions, understanding the other’s perspective has made a world of difference.

So let’s revisit those scenarios from earlier and see them from Mom’s perspective:

1. I was angry when she didn’t take our daughter to a softball game we had woken up early for, so we were left watching the other girls play.

K didn’t make it to that softball game because Mom had an ultrasound appointment, and K was going to get to see her sister for the first time.

Amanda didn’t realize we planned to attend the game since it was on her day, so she didn’t think to give us a heads-up she wouldn’t be there. She openly communicated about all future games.

2. I was aggravated when I went to pick our daughter up at the scheduled time and couldn’t get anyone to answer the door or the phone.

Amanda and James had gone hiking at a local park with K, and Amanda left her phone in the car. James had his, but he didn’t have my phone number yet and couldn’t reach me. We all swapped numbers that night!

Mom was very apologetic, even after I left the house. It never happened again.

3. I cringed when my stepdaughter told stories about staying inside all weekend with the blinds drawn inside Mommy’s house.

Mom was pregnant during Texas summer – of course she kept the house as cool as possible!

K didn’t go without. She got to do crafts, go swimming, and read lots of books with Mommy.

4. I was disappointed she got pregnant soon after dating a new man and worried it would affect our daughter.

Was Krista’s sister planned? No. Is she an absolute blessing, and did that man end up being the love of Amanda’s life and an amazing stepdad? Yep!

5. I hated that she didn’t return most of the clothes I sent our daughter in to her house, until I asked for them.

Turns out I also had some of Amanda’s clothes, shoes, and hair accessories at our house – I just didn’t know it!

After talking about it, we now do quick swaps often after talking through the various items we knew were missing from our respective homes.

I sound really petty now, don’t I? But at the time, back before I’d experienced a co-parenting mental shift, these things were outrageously upsetting. 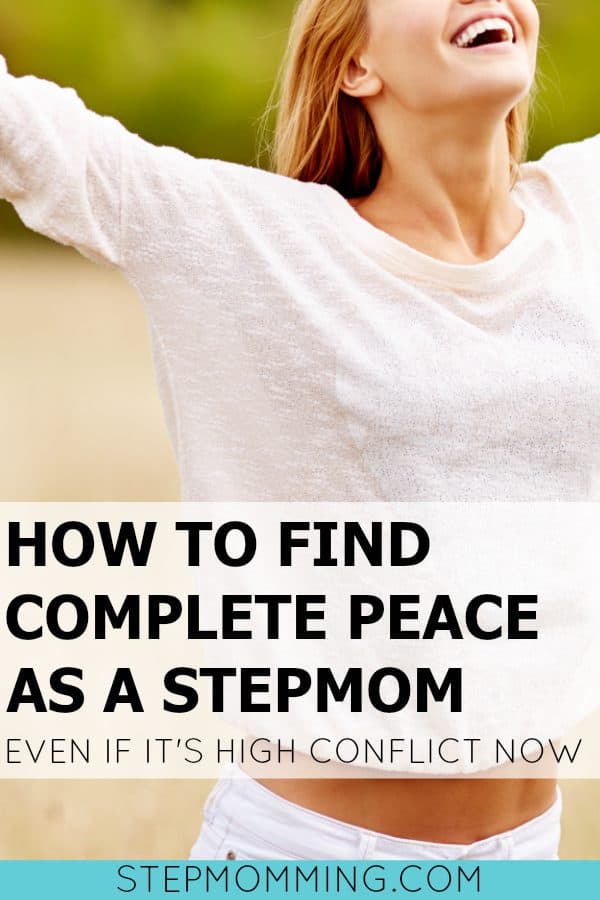 A major part of developing a co-parenting mindset is understanding the other parent’s perspective. The other crucial part is ceasing to worry about things out of  your control.

As Elsa would advise, just let it go, darling.

Your life is going to be so much happier when you stop stressing about things you can’t control. And when you can shift your attitude and develop a co-parenting mindset, you’ll amaze yourself.

I’m proud of you,

Here are a few articles that might help you understand the other’s perspective:

Things I Wish my Stepchild’s Mom Knew: A Letter to BM

Lessons Learned When I Embraced My Role as Second Wife

The Hardest Thing I Had to Learn as a Divorced Mom: Sharing My Daughter