Top
You are here: Home / Co-Parenting / Why You Shouldn’t be Friends with the Ex on Facebook

Should you be friends with the ex on social media?

The Positives of Being Friends with the Ex

Pictures of the stepkids (especially when they do new things!)

When you share custody, you WILL miss out on big firsts for your stepchildren. There’s no doubt about it. You can’t possibly fit every single first experience into your custodial time (and you shouldn’t!).

So when the kids get to experience something new at Mom’s house, it would be awesome to get to see photos of that!

Moms don’t always remember to send these photos along to Dad and Stepmom, but they usually remember to share with Facebook or Instagram! Being friends with the mom means you’d have access to all of those photos and memories. That’s a huge positive!

If you and the mom aren’t real-life friends but just Facebook friends, you could actually find common interests through each other’s Facebook activity and further develop your relationship!

For example, if the mom marks herself as “Going” to a Facebook event for the Backstreet Boys concert next month, you could bond over your mutual love of boy bands. Or maybe you find that you’re both a part of the same Facebook group for dog lovers.

Ability to tag each other in extracurricular or school-related posts

As your stepchildren get older, there are a lot of moving parts: soccer games, gymnastics practice, an open house at the school, fundraiser deadlines, and spirit nights.

Often, these organizations post reminders or details on their social media accounts, and it is super easy to tag the mom in posts (or vice versa!). You can also easily add each other to the closed groups for the soccer league or the teacher’s classroom.

When there’s open communication, so many things are easier in shared parenting!

Why You Shouldn’t be Friends with the Ex on Facebook

But sometimes things aren’t as easy, and it could be better for your relationship if you keep your social media lives separate. There’s absolutely NO shame in that!

It’s possible the ex could post things on Facebook about co-parenting, whether it’s sharing a blog post like this one or that viral photo of the entire family wearing matching jerseys at the soccer game.

And that might make you frustrated, angry, or hurt. Perhaps you see it as her fault that you guys don’t have that kind of family. Or maybe you think she’s being hypocritical or just trying to save face on social media.

Regardless of your exact reaction or thoughts, seeing posts like these on your co-parent’s Facebook probably won’t move you closer to peacefully co-parenting.

Potential to read things as passive-aggressive

Have you ever seen the cryptic Facebook post that’s talking about one of the poster’s Facebook friends? It never says who she’s talking about, but it gets a lot of people defensive. (If the shoe fits, right?)

These are REALLY BAD in co-parenting situations. I see the ladies in our stepmom support community sharing these all the time. The ex doesn’t say who she’s talking about, and it’s never detailed enough to know that it’s definitively talking about the stepmom, so it gets the stepmom all riled up whenever it’s not even obviously about her beyond a shadow of a doubt.

Save yourself from the potential passive-aggressive shenanigans and avoid being friends with the ex in the first place.

In-Laws interacting with her posts

If your in-laws are loving each of the mom’s posts, it could cause you to start feeling insecure or uncomfortable. In that case, it’s probably best for you to opt out of being friends on social media. You can’t change anyone else, and you can’t help it if your in-laws still talk to the ex.

So choose the path of least resistance and opt to not be friends on Facebook instead.

Real Talk: If you were friends with the high-conflict ex on Facebook and you saw her posting photos out at the bar or hosting a party at home on nights when she has custody, or you saw her tagged in posts by her family members when they’re having sleepovers with your stepchildren on mom’s time, you’d get pretty fired up, right?

You’d say things like “She’s so irresponsible!” and “If she’s not going to pay attention to them, they should be here!” and other things of that nature.

So instead of waiting for that to happen, don’t give yourself the opportunity to see those posts.

Contrarily, I had a friend tell me about the time she almost got in trouble during her court battle because of her Facebook posts.

She and her husband were posting photos from the daily activities at night after the kids were in bed, and the mom was taking screenshots of those posts and their late timestamps to court arguing that the dad was unfit because he was keeping the kids out too late.

Again, eliminate the opportunity for this kind of disaster by declining the friend request.

On a similar note, there are endless opportunities to see things that aren’t being done the way you’d like them to be.

The mom could start counting your trips to McDonald’s for dinner, you could get frustrated that GiGi is picking your stepson up from school a 3rd time this week, or that your stepson is in a booster seat instead of your preferred option, a 5-point harness car seat.

Unless you’re best friends with the ex (and maybe even still then!), you’ll likely see more flaws in her social posts than you will see her merits and what a great mom she is.

It’s not worth your mental real estate to stress about all of these infractions and shortcomings. Protect your peace. 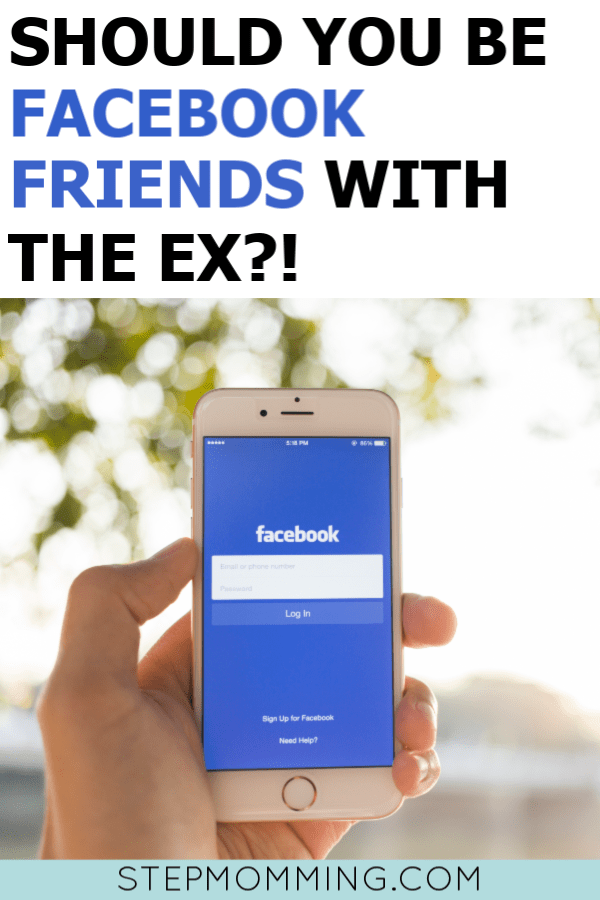 I personally found that being friends with my stepdaughter’s mom on Facebook made me a high-conflict stepmom. I wasn’t showing up as my best self for my husband, my stepdaughter, or my co-parents because I was distracted by things that didn’t matter.

Once I hit the unfriend button, it was like a weight was lifted off my shoulders. I was no longer notified when my stepdaughter’s mom posted in a mutual group (sometimes about me), no longer distracted by her posts in my news feed, or caught up in unhealthy fits of comparison.

Protect your peace. In the majority of cases, the negatives far outweigh the positives.

P.S. Maybe you can’t move past this because you really want to figure out why your stepkids’ mom doesn’t like you.