Top
You are here: Home / Co-Parenting / Divorce / How to Negotiate Custody and Support the Right Way
This post may contain affiliate links, which help support the blog. For more information, read our full disclosure.

When my stepdaughter’s mom served us paperwork last year to modify our custody agreement, my husband and I were shocked, angry, and scared.

We’re both conflict avoidant people, so the idea of going to court to fight for time with our daughter was nauseating, but we had no choice. We weren’t going to go down without a fight! She was worth fighting for.

How to Keep your Cool While Negotiating Custody and Support

When negotiating custody, it’s important to keep the children at the forefront of your mind. It’s all about them. Negotiating in the best interest of your children won’t be painful, as long as you act respectfully, appropriately discuss issues, and respond properly to the other party.

William L. Ury, co-author of Getting to Yes: Negotiating Agreement Without Giving In, defines negotiation as “the process of back and forth communication aimed at reaching agreement with others when some of your interests are shared and some are opposed.” I love, love, love this definition. It includes back and forth, communication, agreement, shared interests, and opposed interests.

A negotiation is going to include back and forth. Both Mom and Dad will be communicating what they want for the child(ren) of interest. This isn’t an opportunity of influence; you’re not to exert control over the other party. This is meant to be a negotiation, with communication, and agreement.

Finally, negotiation is invention. When positions are opposed in a negotiation, parties aren’t going to leave feeling satisfied with the agreement just by settling in the middle. They’re going to need to get creative with the solution in order to find satisfaction for both parties. For example, when we modified our custody and support agreement in December, we completely removed the support section. 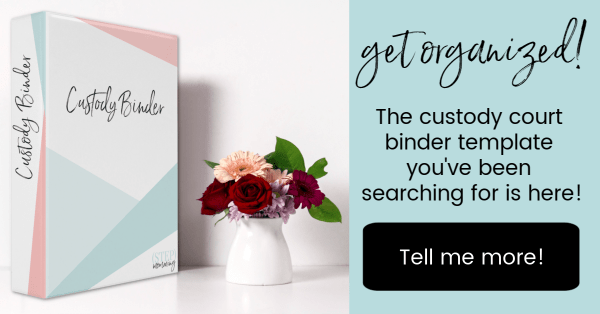 How to Act when Negotiating Custody

The very first recommendation for peaceful negotiation is to avoid triggering insecurities. People shut down when you threaten their sense of:

Status – You are both parents of the child and should be treated as such. Do not belittle the other party or act condescendingly.

Certainty – When you completely shake the other party’s core, you’ll lose them. No one wants to wake up tomorrow and have their entire world different than it was today.

Autonomy – We don’t want our ex spouses making our decisions for us. Allow the other party to retain autonomy over decisions.

Relatedness – Do not threaten the other party’s relationship with his/her child. You’ll see Papa or Mama Bear come out quicker than you thought possible.

Fairness – Do not suggest unfair agreements that will offend the other party and cause him/her to shut down without proper negotiation.
(Source.)

Focus on shared interests instead of opposing positions.

Instead of saying “I want full custody” when you know that the other party also wants full custody, focus instead on the shared interest that you want your daughter to be able to stay at the same school and not have her parents’ divorce affect her education. Agreeing on smaller, shared interests will give you a common ground on which to build your negotiation.

It’s imperative that you separate the people from the problem. You may hate your ex for how things ended, but if you bring that up during your custody negotiation, you won’t get anywhere. In fact, you’ll trigger a negative response which will fuel less productive negotiation. Keep your focus on issues, not people.

It could be an extraordinarily enlightening conversation to discuss your top priorities. Maybe his top priority is to not pay child support and hers is to have weekend custody. When you’re aware of the other party’s top priorities, you’re able to work together to ensure you’re able to all find a way to walk away from the negotiation satisfied.

What to Discuss and How

First and foremost, make sure you’re speaking the same lingo. If the opposing party thinks that “full custody” means he’d never see his kids again but you only meant that you wanted to retain legal custody and split time 50/50, you’re going to be on completely different pages. When I found out that Amanda thought that child support meant that you were paying to not see your kids, it completely changed the way I saw her reactions to conversations about support. It is critical to define terms and intentions when you’re discussing items as emotionally charged as custody and support.

Start your negotiation with some of the easier topics. Perhaps you both agree your child should spend Thanksgiving with Dad’s family since it’s the one time of year Grandma comes into town and agree that Easter should be Mom’s because it’s when her family gets together. Set common ground in the negotiation by agreeing on the easier items first. When you’ve easily identified some of the shared interests and tackled some easier agreements, you can move on to the larger negotiations with a positive mindset.

When you provide justification for your requests (even if it’s slightly nonsensical), the other party is more than 50% more likely to oblige (source – really, you should read it). By telling the other party, “I would like to have custody every other Halloween because it would allow us to both trick or treat,” you’ve given your reasoning and explained your logic. When the other party understands why you’re making the request, he/she is more willing to give in to your request. This seems like common sense (You wouldn’t ask to borrow $20 without telling why you need it) but often when emotions run high, we think the other party doesn’t need to know (I want it and that should be enough).

If you have some larger issues you can’t solve right now, table them. Keep the positive momentum going by settling the things you can right now. If it requires 2, 3, or 5 more meetings to negotiate positively, then that’s okay! Working through the negotiation optimistically and positively is what’s important. If you rush or push hot-button topics, it will become more difficult to agree and ultimately co-parent.

Further, the more positive interactions you have, the better your relationship will be.

1. At all costs, do not get emotional or react to the other party. Stay calm, logical, and grounded in your discussions.

2. If you need clarification, ask why.

3. Listen. Do not prepare your counterargument or get ready to pick apart the other party’s comments. Listen to what is being said.

4. Acknowledge the other party’s feelings and logic.

5. Agree whenever possible with the other party.

6. Use friendly language like “Help me” or empathetic language like “If you were me.” (e.g., “Help me understand what you mean by alternative support agreement”).

7. Project optimism. Exuding negativity will only hurt the conversation.

In the end, both parties should feel like they won. Granted, there’s no “winning” in divorce and custody agreements, but there are compromises that make you feel like you walked away with what you wanted.

Both parties should also feel like their desires were considered fairly. The decided-upon agreement should be fair to both parties.

Finally, the process should have been enjoyable (well… at least not undesirable) for both parties. Both parties should be eager to follow through with the custody and support agreement. When you feel like you won, you are eager to pursue the decision. 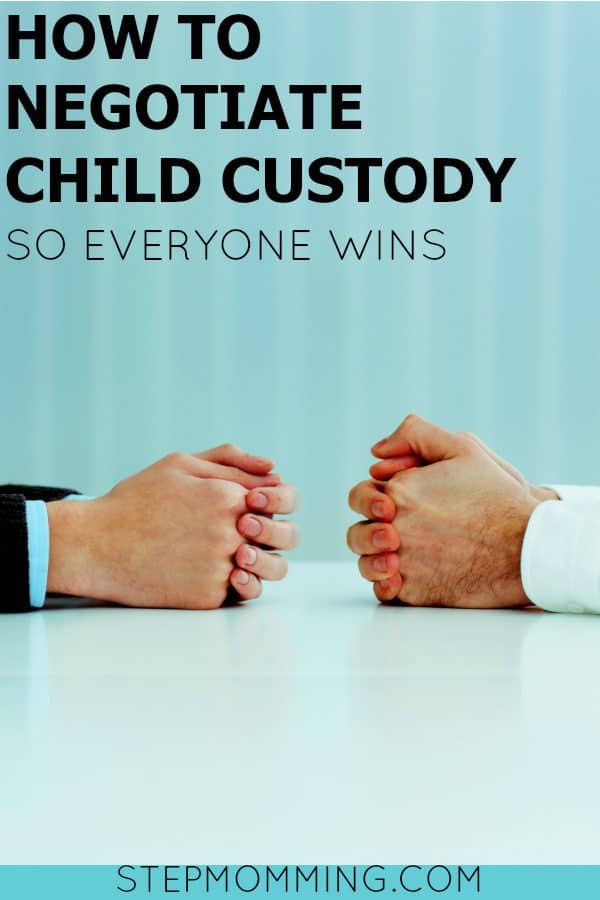 We didn’t leave after negotiating custody last time feeling like we won or like it was an enjoyable experience (and I don’t think the other party felt that way either). If we had openly communicated, listened to each other’s objectives, and kept fairness a priority, things would have gone very differently.  The words “custody agreement” wouldn’t make my heart race. If we only knew then, what we know now!

Negotiating respectfully is one small step toward a positive co-parenting relationship.

I believe in you, Mama! Tell me how it goes in the comments below.

PS: These are things you absolutely MUST include in your custody agreement!