Top
You are here: Home / Family / The Ours Baby Perspective: Lessons From Potty Training

Since before she was born, I’ve been worried about how our “ours” daughter would grow up having a half sibling that didn’t live with us. I’ve considered the ours baby perspective tirelessly.

Will she feel like we spoil my stepdaughter when she’s here?

Are we going to deprive her of experiences because my stepdaughter isn’t here all of the time?

Is there going to be resentment or jealousy from either of them?

What kind of relationship will she have with her sister?

One thing I never fully thought about is how small things would impact her. It didn’t fully kick in until we started potty training.

She was a young three year-old and for months, she had given us all of the signs of being potty trainable as described by numerous websites and articles. She should have been in her prime for this next step.

The thing is, her interest was low, and we didn’t really know why until we dug deep. Only then did we realize our blended family was the true root of her disinterest.

The Ours Baby Perspective: Lessons From Potty Training

Our youngest is our only “ours” child, and my stepdaughter is only with us for short periods of time, living with her mom during the school year and half of the summer.

My husband is military, and while he was deployed, our daughter would often ask to FaceTime her sister while she was away. Many times, she’d ask at a time like 9:45 am on a Tuesday, right after her sister had gotten to school.

“Kiddo, we can’t call right now because she’s in school.” I can’t count how many times I said that. It was a lot over a nine month period.

My husband returned from deployment just before my stepdaughter’s summer break, when she would be with us for the longest period. She was excited to come help potty train her sister, recalling how much she had enjoyed leading “crawling lessons” during a previous summer.

At our new duty station, our house was right by one of the school bus stops in our neighborhood. The schools here started about three weeks before my stepdaughter’s did. During that time, the two girls would watch the bus go by together.

To incentivize our daughter, my husband started planting the seed that you have to be potty trained to go to school.

When my stepdaughter went back to her mom’s house at the end of summer, there was a sudden turn in our daughter’s behavior.

When we would say anything about the potty, she’d scream and run away. She even began acting terrified when we mentioned school and pointed out the bus. It wasn’t until a few weeks later that I made the connection.

We had associated using the bathroom with school, but our daughter had taken it a step further and associated school with the periods of time her sister is at her other home.

All this time, we had been telling our youngest that if she potty trained, she could go to school just like her sister. Then I realized that in her barely three-year-old brain, when her sister was at school, she didn’t come home.

Shortly after that, I started being more intentional with answering questions like “Can we FaceTime Vanessa*?” that came at 9:30 AM on a Tuesday. I tried to explain in the most age-appropriate way why my daughter was with us all of the time, but her sister wasn’t.

Whenever she’d ask where her sister was, I’d say, “She’s at Miss Sarah’s* house, remember? You’ve met Miss Sarah. She’s Vanessa’s mom. You and Vanessa have the same dad, which is why you’re sisters, but you have different moms.”

After a while, she got the idea down and would even answer her own question.

Now, we’re in the midst of it as I’m writing this, but I’m hopeful that it sticks. So far, we’ve still had some screams, but she’s had a lot of success, too.

Her motivating factor? The big one she’s repeated is that if she’s potty trained, she gets to go to preschool, meet kids, make friends, ride the bus, and have a teacher. She remembered that potty trained kids get to go to school, but that doesn’t terrify her anymore.

The other incentive is that when she’s potty trained, she gets a Moana doll that her sister picked out specifically for when she’s accident-free.

Understanding the Ours Baby Perspective

All of this has made me realize how much we need to explain to our youngest. It’s hard for her to understand why she only sees her sister a few weeks out of the year.

Heck, it’s difficult enough for my husband and me to say goodbye when my stepdaughter goes to her mom’s home, and we are able to understand what the court order is and the past that led to our present.

Ignoring this split and seemingly ripping her sister away wasn’t working for our daughter. In fact, I think it may have been detrimental to her progress, development, and relationship with her sister if we continued leaving her in the dark.

We had to face the fact that our daughter needed to know the reasons why her sister wasn’t always with us. This has been one of the most difficult struggles I’ve had to come to terms with in this stepmom life so far.

I imagine there will be even more “ours baby” challenges that will pop up in the future.

Now, I realize I need to look out for the smaller things in her life that may cause her stress, too. Not just the big things I think of.

Our youngest knows the most basic facts, and so far, that’s seemed to be enough for her. We count down the days for her sister to come home and when she leaves, our youngest knows she’s going to her mom’s home and “we’ll see her next time.”

*Names have been changed

P.S. There’s also the opposite perspective to consider. Here are some tips for preparing your stepchild for an ours baby. I hope it helps! 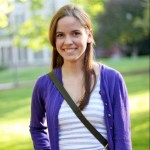 Hi! I’m Cat. I’m a stepmom and mom to two girls in the midwest. I’ve been married to my husband for four years now. I love spending time with my family, writing, watching reruns of Gilmore Girls and The Office, and reading.