Top
You are here: Home / Stepmom / Stepmoms, Step Back!

As stepmoms, we often hear the phrase “step back,” but it took me a while to understand what that meant.

For that reason, when I heard people giving the advice of “stepping back,” I thought that wasn’t for me, too. I needed more concrete advice on how to step back, or when to step back. But now that I’ve figured some of it out, it’s a complete sanity saver, and can often feel like freedom.

Stepping back (for me) does not mean throwing your hands up and completely walking away from a situation. Stepping back usually involves taking something that has generally been “my job,” and giving it to someone else.

If that isn’t a contradiction wrapped up in a downward spiral, I don’t know what is. Stepping back is one way to get myself out of that mess and regain some sanity.

Step back when you are the only one who cares.

As a stepparent, it’s a losing battle if you are the only one who cares about a situation. If the kids don’t care, and the parents don’t care, you can not carry that burden alone.

In this scenario, I’ve got to let it go. I was wanting to chase him around with his glasses, make sure he took them to school, staple them to his face. I was routinely putting in his contacts for him every morning, until I realized he couldn’t give me a few minutes on the weekends to practice it himself. At that point, I knew it had to be over.

This is not my fight to have, and not my responsibility to fix.

I told my stepson that I would always be happy to help him with contacts, I told him that I thought his day-to-day life would be easier with glasses, but that I was done being the one responsible for it. And, I shut the door on being concerned with his eyesight (for now).

Step back when something is driving you absolutely, ever-living, positively bonkers, and you are seething mad whenever you have to do it.

I felt this way about the bathrooms. We have two bathrooms in our house, and 6 people. And for the past two years, not a single person besides me has cleaned them.

That was when it was time for me to step back. I told my partner, I will clean our bathroom, and you will clean theirs. I showed him the paper towels, glass cleaner, shower spray, disinfectant wipes, toilet cleaner, gloves, and trash bags I keep under the sink. I told him I’m not going in this room ever again, and I’ve stuck to it. I don’t go in there to put towels away, I fold them and give them to him to bring upstairs. I close the door before I go upstairs to say good night to the kids, so I can’t see the state of it.

When someone complains about how bad it is, I tell them where the cleaning supplies are, or to ask their dad. But that room is no longer on my list. (It’s also hardly been cleaned since I stopped, but I don’t go in there ever, so what do I care?!)

Step back when you care deeply about something.

This seems a little counterintuitive, but hear me out. Sometimes, there are things that matter to you. And, like the story about the glasses above, they may not matter to anyone else, but you can’t give it up.

Let’s take that same glasses scenario from before, but re-write it a little. What if my stepson were 16, and trying to drive and refusing to wear glasses or contacts. I couldn’t just sit by about that. If he won’t wear them just because I say, I am also not willing to have a fight about it daily with him.

In this case, I feel VERY strongly that he cannot drive if he is not wearing his glasses, but I would still step back. I would step back from my stepson, and I would move on to his dad.

In these cases, you need to be able to get your partner to take up your causes for you—even if they aren’t your partner’s. (For the record, my partner also wouldn’t let him drive with terrible vision, but let’s pretend!) In this case, I need to let my partner know how strongly I feel, and that it is his job to champion my needs as well as his own.

This now has to become his situation with his son, and I need to stay out of it. The “nagging” that happens is between me and my partner, NOT between me and my stepson. This makes a huge difference in keeping the relationships strong in the house.

My partner signed up to be my teammate and help me when I need help. My stepson didn’t. I need to respect that boundary….and then sic his Dad on him!!

Step back when you need a break.

We’ve all been there, we’re just tired and overwhelmed, frustrated and burdened. Things start piling up. Let them. Give yourself a break.

If you need a time out, take one! If you need a day off, go for it! If you want to shut yourself in your room and eat a carton of ice cream and watch trashy TV where no one can bother you, dig in!!

No one in your house wants you when you are run down and feeling empty. Fill up your cup, so you can be the best you can for those who count on you!

Hang in there stepmom, it can get tough but you are doing a great job!

P.S. Did that last section speak to you? Here’s what the exhausted stepmom needs to hear. 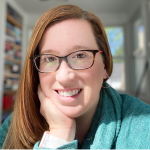 Jenni is a stepmom of 4, since 2015. She grew up as an only child, and has had to learn a lot. Fast! Her crazy tribe keeps her on her toes, but they can generally be found having a good time holding living room dance contests, making jokes about farts, or otherwise laughing at all that life throws their way!