This morning, I pulled into my parking spot at work, and I judged my parking based on the distance away from the car next to me, as I always do. When I opened my door, I realized that I was really far from the line on the driver side. As I walked around the car to see if I needed to adjust my parking, I realized I had parked on the line – no problem, I’ll just adjust really quickly before I head to my desk. The lady who parked in the car next to mine had met up with a friend also walking into the building at the same time, and she motioned to my parking job with the nastiest look on her face. It wasn’t a look of mockery. It was a look that said, “Can you believe this person would be so rude?”. When I said, “Whoops! I’ll move my car! I didn’t mean to park so close!” she just shot me a nastier look.

Seriously? It was a simple mistake, and as soon as I realized it, I fixed it. There’s really no need to be so rude.

Obviously I couldn’t help but apply this to my co-parenting outlook on life.

A rude co-parent comes in so many shapes and sizes, it’s hard to list all of the examples. I’ll give you just a small sample of the very real examples I’ve heard:

I chose to use examples of possible one-time offenses for the purpose of this argument because recurring disrespect is a completely different topic for another day!

I have 3 things I want you to keep in mind when you’re dealing with a rude co-parent.

That’s her bad mood, not yours. There’s no reason someone else’s rude behavior should have the ability to upset you. She didn’t make you angry. You allowed yourself to get angry. You have to consciously allow someone else’s behavior or actions to affect you. If you can make the decision to continue on with your day unaffected, that’s exactly what will happen.

I heard a speaker a few months ago who said that when she is on the road with her kids and they experience an impatient driver, they make up excuses for the person. So if someone speeds past her and cuts her off, they might think the man’s wife is having a baby and he has to rush to the hospital! Or, to be a little sillier, if someone runs a red light in the cross-direction in front of them and their green light, they might suggest that the person was seeing imaginary animals and thought there was a herd of elephants rushing after them!

We can use this exercise with our co-parents to give them a little grace, have a little fun, and calm ourselves down when we sense someone else’s actions wearing on our emotions. Let’s try it out with our previous examples:

A little silly, sure. But it makes you feel just a little better, right? Besides, getting angry wasn’t doing you any good, so this certainly couldn’t be any worse.

2. Kill her with kindness.

While I wanted to shoot a nasty look right back at the B in the parking lot, I chose not to. She’s clearly not having a good day, and she’s taking her frustration out on me. In fact, she might even be feeding me to elicit an angry response so she has even more reason to be angry at the world today.

I’m not suggesting that you don’t address the issue if it’s recurring or if it’s suggesting a change to your co-parenting relationship/schedule you’re not comfortable with. But table that discussion for a later date. Respond with kindness now and address the issue later when all parties are unemotional and can talk logically about the issue at hand.

3. You don’t know what she’s dealing with.

I have no idea what caused that lady in the parking lot to be so rude over a mistake, but she was clearly dealing with something. Maybe she was running late because her child was up sick all night, she had just found out a close friend was diagnosed with cancer, or she had just found out a huge client was coming into the office today with zero warning. I have no idea what triggered her bad mood, but it obviously wasn’t just one stupid parking mistake.

When we look at our co-parents, it’s sometimes easy to assume there’s malicious intent. But there’s usually not. I bet Dad didn’t show up late to pick-up just so you’d miss your appointment. I’m sure Stepdad didn’t change the pickup policy just to be a jerk. As impactful as these decisions are in our lives, our co-parents don’t see them as big as we do. They don’t see the large effect they’re having on our lives.

Empathy is a superpower. You have no idea what your co-parent is going through. Maybe Dad’s job is in jeopardy because the company’s going under; perhaps Stepdad’s sister just found out her son has a brain tumor. Chances are that the disrespect from your rude co-parent wasn’t intentional. Extend grace, respond with kindness, and don’t let his bad mood bring yours down.

When you’re in a situation with a rude co-parent, remember it’s not you. It’s her. She is the one with the issue, and she’s not going to bring you down. You’re better than that. You’re in control of your own emotions. Act a little kinder than necessary; catch her off guard. Then, exercise empathy. She’s clearly dealing with something else unrelated. Don’t sweat the small things. Unless there’s a major issue that needs to be addressed immediately, let this one go. 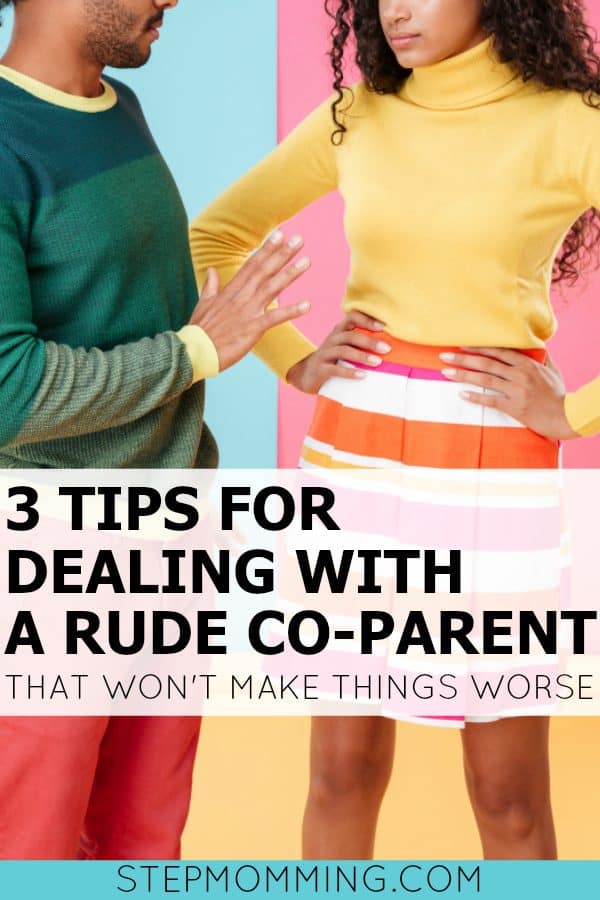 Was this list complete or am I missing one of your ways for coping with a rude co-parent? I want to hear all of those silly stories you use for justifying your rude co-parent, so please share them in the comments section below!

P.S. Here are some other reasons why your stepchild’s mom doesn’t like you…