Top
You are here: Home / Stepmom / So, Your Stepchild’s Mom is Becoming a Stepmom. 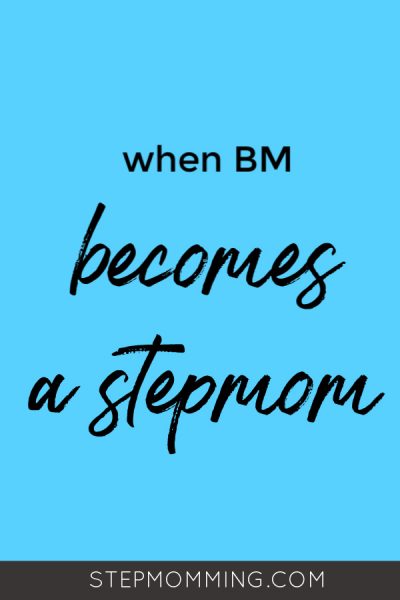 Stepparenting is something I wouldn’t wish on my worst enemy. But what would you do if you found out your stepchild’s mom is becoming a stepmom?

Picture this: you and your boyfriend start dating while his ex is still single. His ex is also the mother of his child.

She hates you. She hates him. Things are high-conflict… everything turns into an argument between them.

Despite the constant fighting, she still expects things from him. He is the first person she calls when she needs something fixed at her place. She texts him every time she sees one of their mutual friends for no apparent reason.

You think she treats him unfairly. You think she doesn’t respect him as the father of their child. You’re convinced that she’s trying to turn the child against him while simultaneously trying to win him back.

She is constantly overstepping in your eyes. You are angry and exhausted.

You may consider her your worst enemy. The thought may have crossed your mind, “I sure hope she starts dating a man with kids one day so she can know how it feels!”

So, Your Stepchild’s Mom is Becoming a Stepmom.

I’d be lying if I said I’ve never thought about my stepdaughters’ mom becoming a stepmom and the joy that may bring me.

As the years have progressed, our stepfamily has transformed from high-conflict to high-functioning. Sure, we still have our shared parenting struggles, but we all try to work through them with grace.

Since my husband handles most of the parenting-related communication with her, we have built a friendship without power struggles or feeling like we’re trying to overstep each other.

I really love and care for my stepchildren’s mom. I want the best for her. I want her to be happy.

It’s been many years and she still hasn’t settled down with someone new. That was, until her new boyfriend… who is a dad!

Okay, so they may not be settled down yet, but she is certainly in that “new future-stepmom” role, and she’s getting a real taste of it.

Every new stepmom needs a friend to vent to.

I was a little surprised when my stepdaughters’ mom chose to confide in me about her almost immediate stepmom insecurities. Surprised, but overjoyed.

She trusts me and that means the world to me. As a professional writer on stepmom life, I felt qualified to hear her out and provide her with ample amounts of support and encouragement.

I’m prepared for the reality my stepchild’s mom is becoming a stepmom, but I wasn’t prepared for her to give me déjà vu in her vent sessions.

For example, one day she vented to me about a text her boyfriend’s ex sent him. The text contained a picture of a deeply personal time in their previously together family, and the words accompanying the picture stung.

My stepdaughters’ mom was hurt. She didn’t like those memories being brought to her boyfriend’s attention. She also didn’t understand why on earth his ex would have sent that text message.

As she told me this story, I was flooded all over again with the feelings of insecurity and rage I felt many years prior when she sent my then-boyfriend a similar text message.

In a later conversation, she asked me if I thought it was appropriate for her boyfriend to buy his ex a gift for Mother’s Day. Having a single ex and kids too young to take on that responsibility themselves, the answer was a no-brainer for me, “Yes, of course! The gifts are from the kids!”

I semi-tactfully pointed out, “You know… we buy your Mother’s Day presents from the kids. It’s just like that!” After I said it, I remembered that in this early stage of stepmomming, you just aren’t ready to hear that type of advice.

My stepdaughter’s mom becoming a stepmom changed me.

When my stepdaughters’ mom first starting dating a man with kids, I thought she would finally see stepmom life through my eyes. The truth is, she won’t. No one ever will.

Each stepmom’s journey is unique. Rather than hoping she understood how she made my husband and me feel during our bad times, I decided to empathize with her through her bad times.

I know she has appreciated having me there as part of her support system. I can relate. I can vent with her when she needs it, and I can also offer advice when she needs it. I’m simply there for her, and it’s great.

Unexpectedly, I’ve grown through this process as well. Hearing her experiences reminded me how far we have come on our shared parenting journey. Realizing how I’ve chosen to respond to her has proven to me that I really am at peace with our blended family.

I have grown as a person throughout my time as a stepmom in ways I never imagined in the beginning. In a lot of ways, I can thank her for that growth. Through each up and each down, I have matured.

Lastly, we have strengthened our bond. We can relate to each other on a new level now, and our trust in one another has continued to build.

Being a stepmom used to be something I wouldn’t wish on my worst enemy. Now, I have a totally different perspective. I am stepmom strong.

If you’re out there wishing that karma would come back around for your stepchild’s mom, I encourage you to stop worrying about her and start worrying about yourself. Shifting perspectives can turn you into a whole new woman!

P.S. Do you have a new stepmom friend who needs help? Here’s a touching open letter to the new stepmom.

Ashley is a police wife, a stepmom to two beautiful stepdaughters, and a "dog mom" to her German Shepherd, Dirk, and Belgian Malinois, Dax. She is a Certified Life Coach with her MEd in Educational Leadership, and is in pursuit of her PhD in Higher Education Administration. Ashley works in academic affairs at a large university in Virginia. She and her husband also own a successful off-leash dog training business!